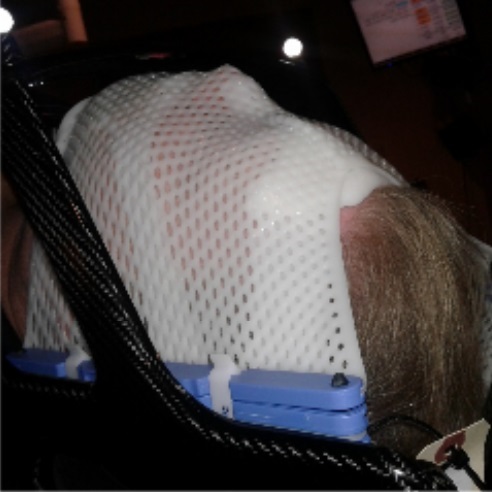 The condition neurofibromatosis type 2 (NF2) leaves patients with tumor growth starting at birth, with risk of more in their lifetime. However; the tumors typically grow slow enough, issues from tumors may not develop until teen years or after. Each individual is different.

Treatment for tumor management include; 1) radiosurgery of some form, 2) surgical removal of tumors, resection, 3) tumor-drug treatment, and 4) watch and wait.

It is important to understand the pros, cons and have questions surrounding these treatments if considering radiation therapy with a doctor. While radiation treatment may be a good choice to take care of an immediate tumor problem, it can result in problems weeks, months or even years later. (Cancer Connect, 2014)

Some of the concerns of radiation therapy are related to changes in the tumor.

The success or failure of treatment is unknown until changes can be detected. Treatment is deemed a success if the tumor stops growing or shrinks and a failure if it continues to grow. These changes can take up to six months to see on an MRI. Also radiation can result in initial tumor swelling before shrinking or stabilizing. Even if a tumor might eventually shrink after treatment, there could be potentially harmful consequences of swelling depending on tumor shape and location.

There can be further complications even when tumors to shrink, the shrinkage may only last for a period of years and if the tumor begins to grow, but radiated tumors have a chance of require follow up treatment. Radiation treatments change the consistency of the tumor mass making subsequent surgery more complicated. It may also result in more extensive nerve damage if surgical removal is required.

However; vestibular schwannoma, acoustic neuroma tumor masses from spontaneous tumor growths, not the result of the NF2 condition, would not include more than one mass.

Neurological impairments can develop, based on the area of brain that was treated with radiation and possibly lead to seizures among other problems. ( Department of Nursing, 2011), (Hladik, 2016)

Rdiation induced necrosis (RIN) is necrosis (cell death) and edema (cell swelling) in the tissues that surround the area of treatment. While not a tumor, RIN can act like a tumor having mass effects (crowding of other tissues) and may have to be removed by surgical means. This complication is thought to occur in between 1 and 15% of treatments. (Kim, 2007)
Brain cell death can cause Seizures.

It is not uncommon for epilepsy and seizures to start as a result of radiation treatment on tumors in the skull. When the brain trauma causes epilepsy, seizures will be an ongoing issue for life.

As a result of the missing or mutated tumor suppressor gene, radiation therapies can place people with NF2, at a higher risk for growth of additional tumors, increased growth of existing tumors in the surrounding area of treatment and put these patients at a higher risk of the tumor becoming malignant. While the chance of a tumor becoming malignant is small it is a risk nonetheless. The risk of Cancer is higher for NF2 patients than non-NF2 patients. [(Wiemels, 2010), (Evans, 2009)]

At birth and throughout adolescence, the human brain is in a developmental stage. Radiation therapies done before the brain is finished developing leaves people at a higher risk of long-term cognitive issues.

Radiation can sometimes destroy the nerve the treatment was aiming to save. It can also destroy or damage other nerves as well. For example sometimes the Facial Nerve is damaged during VS (Vestibular Schwannoma) radiation treatments, but it can also damage the actual Vestibular Nerve the tumor is growing on. The possible risk of damage to not just the treated nerve but to the surrounding nerves is a reason that certain areas of the brain cannot be treated with radiation. (Plotkin, 2008)

A patient with an ABI or CI may have their implant permanently damaged by radiation if it is administered near the device. The implant should be a specific distance away. The exact distance varies based on radiation doses, but would typically be safe from radiation treatments on the other side of the brain than the implant.

This might happen only in the area of treatment and may not be permanent. How much hair is lost varies. (Department of Nursing, 2011) 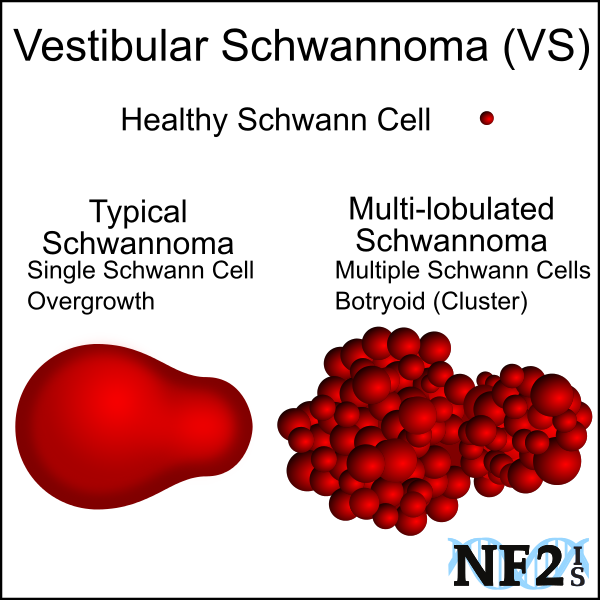 There are specific reasons a form of radiation might make an individual a candidate for a radiation treatment for a specific damaging tumor.

Radiation may be more likely to save a nerve or the remaining nerve function that a Schwannoma tumor is growing on, for an extended period if the treatment is successful. (Lustgarten, 2013)

Radiation is worth considering if a tumor is in an inoperable location (too far in the brain to reach), this would not include tumors close to the brainstem. (Delannes, 2012)

The procedure is non-invasive. (Lustgarten, 2013)

Radiation might be a better treatment if a patient is not healthy enough to cope with traditional microsurgery. It might be the only choice in the case where surgery would be life-threatening, elderly patients, very low body weight patients or patients in general poor health. These patients would not pass pre-surgical screening. (Husseini, 2013)

Recovery from Radiation treatment is short and is often done as an Outpatient procedure. Patients are often released to go home the same day as the procedure. (UT Dept of Neurology, 2011)) Microsurgery can require a hospital stay of up to 3 to 15 days.


4. Questions to Ask Your Doctor

There is a list of factors to discuss with your doctors before having radiation treatment. You should feel comfortable enough with the medical team you plan to allow to treat you, to ask and make sure they understand your questions and concerns.

The list is extensive, and you may only want to discuss some of the questions as others might not apply to your situation. For example, you may not have an implant. You should ask questions that occur to you that aren't on the list also. Feel free to print the checklist out and take it with you to your appointments. Take a pen or pencil with you to take notes! Being prepared and knowing what to expect can help reduce anxiety and stress in children as well as adults.

Confirm the doctor is aware that individuals with neurofibromatosis type 2 (NF2) typically have multiple small schwannomas, not a single mass. These masses can appear as one mass in an MRI. The doctor needs to identify each part of the schwannoma since the radiation treatment process requires treatment of each part separately.

Confirm the doctor is aware radiation treatment can destroy a hearing implant if the treatment is at a high dose close to the receiver (implanted part of a heating implant).

All people are exposed to radiation constantly in our daily lives; this is unavoidable. Radiation is energy that radiates from a source and travels through space may leave part of its energy in something (matter) it meets. It is capable of stripping electrons from atoms thereby breaking chemical bonds. It can damage cells and tissues. However, only Ionizing Radiation is dangerous and can affect the development or growth of tumors. Non-ionizing Radiation energy is too low to be of much concern. (AFRRI Staff, 2014)

Ionizing radiation can cause damage to matter, particularly living tissue. For example, DNA is vulnerable to this type of radiation and could cause mutations if exposed to enough of it over a long enough period. At a high level, radiation, it is therefore dangerous, so it is necessary to control our exposure. (World Nuclear News)

Different radiosurgery treatment options for the treatment of inoperable and recurrent benign NF2 tumors are available. [(Johnson, 2008),(NIDCD, 2010)] During these treatments the head is; secured in the machine, similar to head hold for brain MRI, and the radiation is set to focus on the tumor. The duration of treatment the doses is tumor size dependent, specific to the machine, and radiation treatment type. [NIH, 2010]

Return to Top of Page
News