Under the name Zactima™, Vandetanib had a high absorption rate and any excess would leave the body unchanged in the form of feces or urine, which is uncommon and something more oral treatments need to do. However while effective as a treatment, in the initial clinical trials a heart condition easily developed, prolonged QT interval. As a result of the side effects only three months after the trial started and several months earlier than trial expected to end, treatment discontinued listed as unfavorable benefit-risk balance.

More recently Vandetanib has been reintroduced under the name Caprelsa™ in the treatment of certain types of thyroid gland tumors. 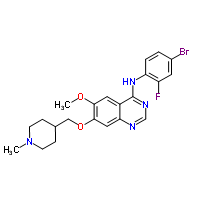