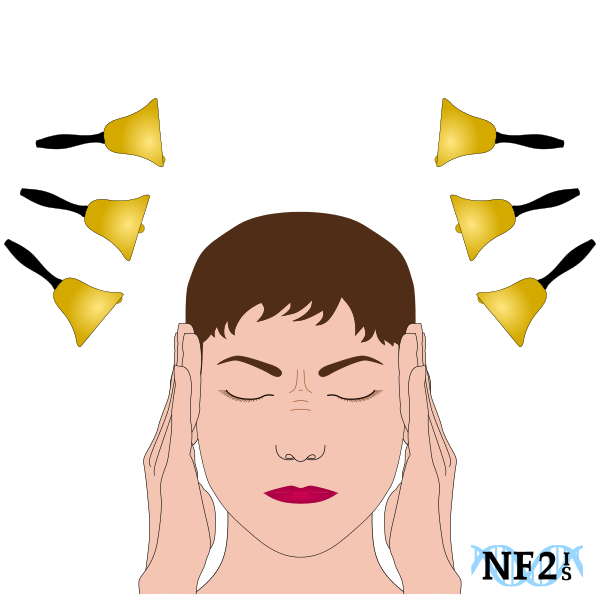 Tinnitus is a phantom sound people start to hear when hearing loss develops. Once it starts, it does not go completely away, but things can be done to make it manageable, other things can make tinnitus worse.

Level of disturbance can vary from day to day, but tinnitus may be;

Unfortunately, tinnitus remains after an ear can no longer hear.

There are different forms of tinnitus that if not managed can cause different additional issues. Included are reasons for tinnitus, might result in different sound or sounds, and means of tinnitus management.

All forms of tinnitus get worse with stress.

Schwannoma tumor damage of both the vestibular nerve (balance) and cochlear nerve (hearing), called vestibular schwannoma (VS), the hallmark tumor of individuals with neurofibromatosis Type 2 (NF2), slowly starts as Subjective Tinnitus before the development of deafness.

When tinnitus starts, it is important to see an Ear, Nose, and Throat Doctor (ENT) (otolaryngologist), immediately and neurologist for an MRI.

Subjective tinnitus is a common hearing disorder with a potentially devastating impact on the quality of life (QoL), characterized by sound perception in the absence of an acoustic stimulus. [1]

Unfortunately completely severing the cochlear nerve will not be the end of the tinnitus. Subjective tinnitus is a sound that has no external source. Sounds might include:

It has been debatable for some time if this is or is not a problem. But, a study at the Deafness Institute in the UK concluded it is not a tinnitus trigger.

Vitamin B12 is in many foods, but for different reasons, are sometimes best taken as oral vitamin B12 supplements, or vitamin B12 injections. These are options to discuss with a doctor to fit personal needs.

Reading, or learning; a new language, to do something differently, or something new.

A simple form of brain stimulation after lack of hearing is an ABI, but other implants and options may have the same result.

Gaze-modulated tinnitus (GET), is tinnitus noted as common following cerebellar pontine angle surgery, damage from vestibular schwannoma, but there are also reports of GET with no surgical history. GET may be the result of single-sided or bilateral damage. It is similar to phantom limb syndrome (deprivation of sensory input) where eye movement results in different sounds that only the individual with GET can hear.

Eye movement in different directions can change volume and tone of the sound made from GET.

There are additional forms of tinnitus unlikely to result from NF2 issues that are a result of either other conditions, loud noises or medications. Objective Tinnitus is a health-related form, also unlikely for NF2, vestibular schwannoma damage.

Objective tinnitus (pulsatile tinnitus)[2] is an internal sound that usually has the same rate as the heart. This form of tinnitus is easily found by feeling the pulse at the same time as listening to the tinnitus.

Pulsatile tinnitus is due to a change in blood flow in the vessels near the ear or to a change in awareness of that blood flow. The involved vessels include the large arteries and veins in the neck and base of the skull and smaller ones in the ear itself.

4. Reasons for Increase in Volume and Annoyance

Hearing loss can be temporary, slow developing, temporary, a person may be Hard of Hearing (HoH) with some level of sound, or complete hearing loss/deafness can have a seemingly increase in volume or annoyance as a result of:

5. Issues Tinnitus Can Cause

Tests for hearing loss include volume and pitch of sound but also include word recognition since there is no other way to determine the actual volume of Tinnitus sounds.

Fear of loud sound; the volume of what is considered loud would change as hearing loss as the level of tinnitus gets worse.

Fear of a certain range of sound.

Misophonia is hatred of sound of a certain type of sounds, may cause anger. Not limited to volume or pitch.