The facts contained here are primary facts proven about to benign meningioma (non-cancerous); these risks are also potential growth factors for all tumor types including schwannoma, and ependymoma.

Malignant (cancerous) tumors grow fast as they spread to other parts of the body, with lethal consequences when not treated fast enough and with the right treatments. Benign tumors growing at a slow rate can be just as harmful, especially within the brain where the smallest growths can be dangerous. It is for this reason that in 2002, The Benign Brain Tumor Cancer Registries Amendment Act (H.R. 5204), was passed mandating registration of benign brain tumors such as meningioma in the United States. As a result of this studies have been done to understand these tumors better. [Wiemels, 2010]

The condition neurofibromatosis type 2 (NF2) results in a loss or damage of or a dysfunctional NF2 gene which results in a lack of the MERLIN protein, NF2 a tumor suppressor gene. Development and growth rate of tumors is primarily determined based on each NF2 mutation, even if other factors may increase the rate of growth; things that could risk increase tumor growth include environmental and lifestyle variables. Tumors will automatically grow at some rate by natural life progression starting at birth.

From first to the second generation, NF2, an individual might have more tumors and faster growth than parents; by the third generation, general growth pattern would be about the same. Symptoms dealt with would be different, if a person might have genetics to grow tumors in the spine as damage at each vertebra would result in different actual issues. But understanding of environmental variables could help a person ultimately have a slower rate of growth than other NF2 family.

The variables discussed here may affect not just people who have the NF2 condition, but other tumor growth issues that also develop because of a mutated tumor suppressor gene.

All of these things are topics that require more research.

It can cause damage to matter, particularly living tissue. At high levels, it is, therefore, dangerous, so it is necessary to control our exposure.[World Nuclear News]

Proven increase in Meningioma growth during the peak reproductive years (age 23 to 35), the presence of estrogen, progesterone, and androgen receptors, the certain phase of the menstrual cycle and pregnancy. As of 2010, there was not enough data for definitive results for oral contraceptives or hormone replacement therapy (HRT). [Wiemels, 2010] Meningioma growth during pregnancy has since been concluded to be a result of blood flow changes for infant development, not hormonal, Haemodynamic Response.[Wiemels, 2010]

The term diet refers to combinations of foods eaten or specifically avoided, some examples would be; vegetarian, vegan, ketogenic, and the Mediterranean diets. There was not enough information collected for effects on Benign tumors in the report done for the Benign Brain Tumor Cancer Registries as of 2010, with a note of more information needed. Additional follow-up on specific food concerns was not mentioned.[Wiemels, 2010]

There is a risk of tumor changes from; 1) recombinant bovine growth hormone (rBGH), 2) genetically modified food (GMO), 3) BPA (Bisphenol A), and 4) pesticide use have been ongoing concerns for the creation and growth of tumors of all types for several years.[Wiemels, 2010] 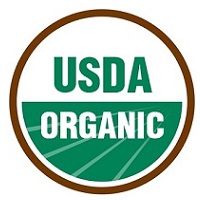 Growth hormones given to animals is a topic that requires more research. Cows are given recombinant bovine growth hormone (rBGH)/recombinant bovine somatotropin (rBST). The clear results and purpose of rBGH are faster-maturing animals for meat and more milk production, for fewer animals to feed more people. However, these hormones could result in health risks, including tumor growth. There has been enough scientific research to result in debates worldwide. These debates are leaving many consumers looking for Organic food options.

To guarantee the of purchase of Organic foods specifically, look for the U.S. Department of Agriculture (USDA) for the seal of approval. It does not matter what the packaging says it does or does not include if the seal is not in the package the food was not approved by the USDA as Organic. 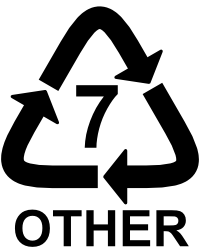 BPA, BPA Bisphenol A, is found in plastics listed as a recyclable plastic of Resin ID Code #7. However; it is also found in cans since cans are lined with plastic on the inside, an alternative to prevent plastic or metal in foods, consider foods in glass jars instead of cans. BPA mimics Estrogen. (Read Hormonal concerns above).

Pesticides are chemicals sprays on crops to repel insects, other unwanted animals and also results in less produce lost due to decay. There are different forms. While Organic produce are even protected with sprays, the Organic produce is only sprayed with a combination of Canola Oil and Baking Soda is a safer combination in comparison to the neurotoxins in the non-Organic spray forms.

Pesticides have been linked to Cancer, Alzheimer's Disease, ADHD, and even birth defects. Pesticides also have the potential to harm the nervous system.

Many things that can potentially result in tumor growth requires more research, but there have been ongoing concerns for the following:

Some occupations put employees at risk and direct exposure to different radiation and chemicals; in the United States, this is no longer an issue as a result of government regulations to protect employees. [OSHA]

As of December 29, 1970, the Occupational Safety and Health Act was signed to protect workers' safety and health. The purpose of the legislation was to "assure so far as possible every working man and woman in the Nation safe and healthful working conditions." [OSHA]

The United States Department of Labor called the Occupational Safety and Health Administration (OSHA). OSHA establishes rules to protect workers that must be enforced. [OSHA] The only exception to this is for individuals handling pesticides without following proper safety precautions.

Individuals with either of the following in their immediate area would be at an increased risk of tumor growth: A good deal of confirmation on the problems with cigarettes and has been established, including and not limited to tumor growth.

Second-hand cigarette smoke, breathing in the smoke of others, is said to cause the same amount of damage to a person as smoking cigarettes. Today damage from second-hand smoke is less likely as many locations no longer allow indoor smoking.[(Wiemels, 2010), (National Cancer Institute, 2014)] 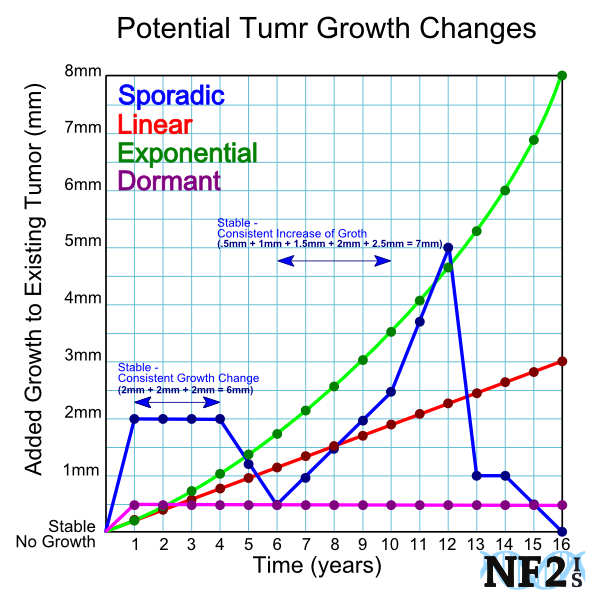 Different growth patterns would likely apply to different tumors in the same individual from year to year. Even a strong MRI with contrast could miss slow growth and even if no or slow growth is noted, should not be a factor in scan frequency, consideration of how often MRIs are done in months or years.

While individual tumor management is primarily based on issues a patient notes from tumor changes, some tumor intervention is based on tumor size, location and noted growth rate an individual might not have symptoms until it is too late. For this reason, it is important to follow up with regular MRI scans.